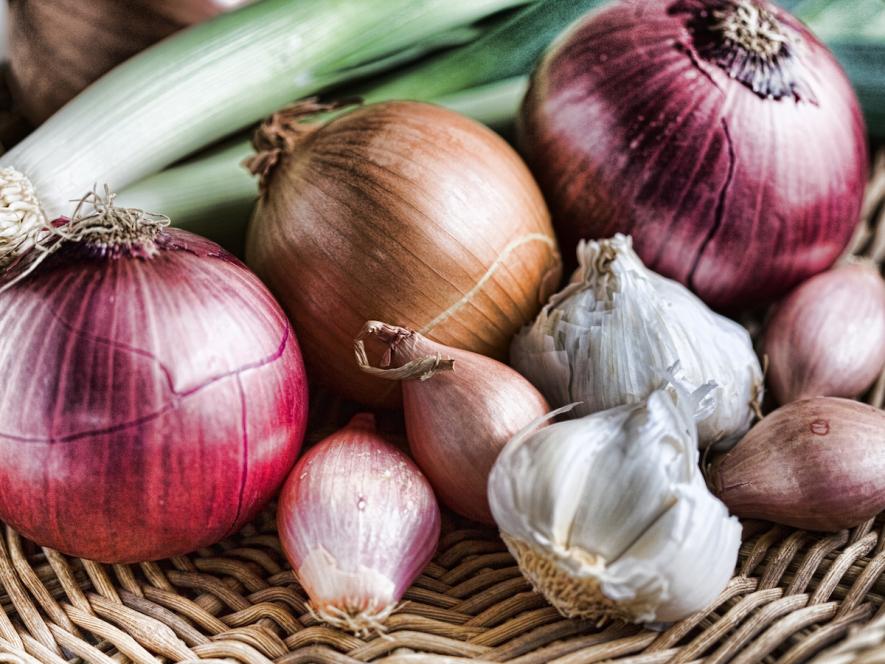 Four recent research papers released this year have shed new light on colorectal cancer and how it may develop. Two of these relate to dietary factors, one to a link between oral health and colorectal cancer and one reviews differences between early onset and later onset of the condition.

Study 1: Does consumption of allium vegetables decrease the risk of developing colorectal cancer?

Allium vegetables are those in the onion family, which also includes spring onions, garlic, shallots, chives and leeks (allium means 'garlic' in Latin). A study conducted in China[1] from June 2009-November 2011 and involving 833 men and women with colorectal cancer and 833 volunteers without colorectal cancer, monitored food intake and demographic data across both groups. The results indicated that those in the highest allium consumption group were 79% less likely to develop colorectal cancer than those in the lowest allium consumption group. The study also concluded that a consumption level of 50g every day of allium vegetables would have health benefits, but also noted that the cooking process would affect the level of benefit, with boiled vegetables losing some of their nutritional value compared to eating them raw.

Conducted by a team based at the Gene Expression Laboratory at the Salk Institute[2], the study involved feeding mice a high fat diet and found that those mice with the APC genetic mutation (the most common genetic mutation in humans with colorectal cancer) developed cancer more quickly on a high fat diet. The APC gene acts as a form of tumour suppressor and any mutation in this gene may allow tumour formation, especially in the stem cells involved in the replacement of cells that form the lining of the colon. The theory put forward by the research team is that a high fat diet disrupts the mix of different bile acid types in the gastrointestinal tract which in turn 'switches off' a hormonal signal, allowing cancer cells to divide.. This theory may explain the increasing prevalence of colorectal cancer in people under 55 during a period when there has been an overall increase in high fat diets in the general population.

One of the researchers, Ruth Yu, explains “It could be that when you're genetically prone to get colon cancer, something like a high fat diet is the second hit.”

A research team at Columbia University[3] has found that a common bacterium involved in the development of plaque on teeth – Fusobacterium nucleatum (F. nucleatum) – releases a molecule that is implicated in an acceleration in the growth of colorectal cancer. Although other factors contribute to the development of colorectal cancer, microbes present in the body may also play a role. The team found that a molecule called FadA adhesin produced by F. nucleatum was responsible for triggering a signal pathway in colon cells associated with a number of cancers. They also found that a third of people who develop colorectal cancer have the bacterium and that in these cases the cancer was often a more aggressive form.

Study 4: Is colorectal cancer different if it early onset?

A recent study conducted by a team at University of Texas MD Anderson Cancer Center[4], who analysed results from a cohort of more than 36,000 patients with colorectal cancer, found that younger patients were more likely to have specific gene mutations and subtypes of colorectal cancer not present in patients in older age groups. The research was conducted to see if there was any reason behind the increase in early onset colorectal cancer over the past twenty years, during which incidence in patients over 50 had been falling. The study also found that patients who developed early onset colorectal cancer and had predisposing conditions (such as IBD) also had quite different clinical and genetic characteristics compared to patients who did not have any predisposing conditions.