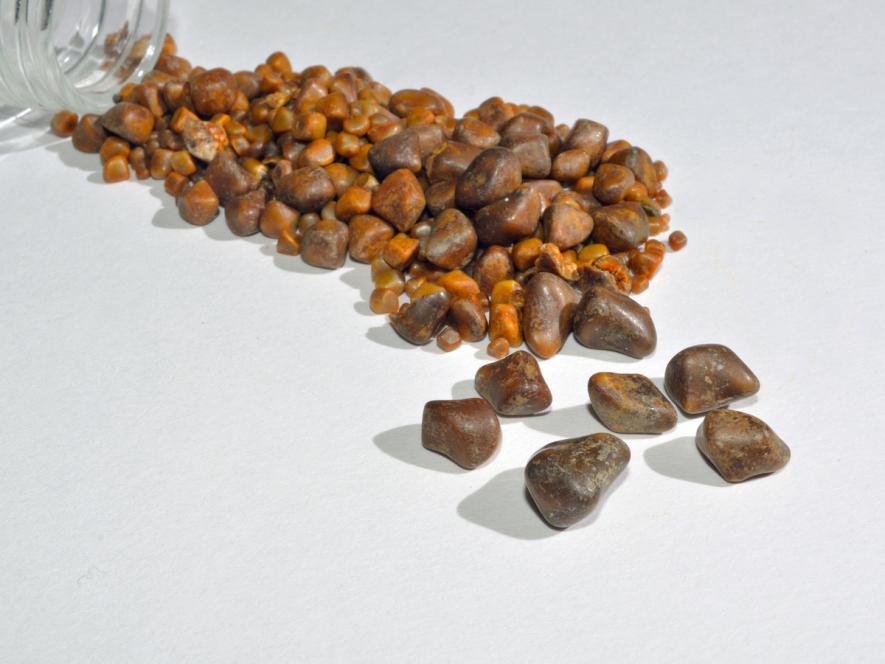 The gallbladder is a small 'sac' - a hollow organ - that is around 7-10cm long and sits under the right lobe of the liver. Its job is to hold a reserve of bile, which is a digestive juice produced by the liver, needed to break down fat ingested from food. Bile is composed of a mix of water, cholesterol, bile salts, bilirubin (made of broken down blood cells), body salts like potassium and sodium and some metals, for example copper.

Any water in the gallbladder is continuously removed, leaving the resulting bile highly concentrated. When you eat fatty food the gallbladder contracts to 'inject' a quantity of bile into the small intestine to help digest the fat you've eaten by converting it into fatty acids.

Medical science does not know exactly why gallstones form in the gallbladder (a process called 'cholelithiasis'), but it's thought to be connected to the gallbladder not fully emptying and crystals then forming and growing due to excess cholesterol in the bile.

Gallstones can vary in size from the size of a small pebble up to tennis ball size. They tend to be one of three types…

In most cases (around 70%) where gallstones are present, they cause no symptoms. In fact gallstones only need to be treated when they do cause symptoms and only around 8% of people with gallstones are affected by serious gallbladder attacks.

This is most commonly caused by one or more gallstones blocking the bile ducts and allowing bile to build up in the gallbladder. This is called 'biliary colic', the primary symptom of which is pain in the upper right of the abdomen, particularly prevalent after a meal containing a lot of fat.

When you have biliary colic you definitely know about it – the pain can be intense. Sometimes the gallstone/s blocking the bile duct move out of the way, in which case the symptoms go away, in other cases the gallstones lodge in place.

When this happens, the most effective treatment is removal of the gallbladder, a procedure known as cholecystectomy. The first bit of good news is that the body can function perfectly well without the gallbladder and the second is that the procedure can be performed using minimally invasive surgery, which means a short procedure and quick recovery. In rare cases where the gallbladder has become very inflamed, open surgery may be recommended.

Gallstones are more common in women than men and also tend to affect people who are overweight and those who have a family history of gallstones.

If you think you might be at risk of having gallstones, there are a few diet and lifestyle changes you can make to reduce the risks of them forming and/or of them causing symptoms. These are…

What's interesting from cohort studies is that having a moderate alcohol intake also lessens the risk – so feel free to have the occasional glass of wine or beer, for the sake of your gallbladder!